Our Interview with Li’l Bub 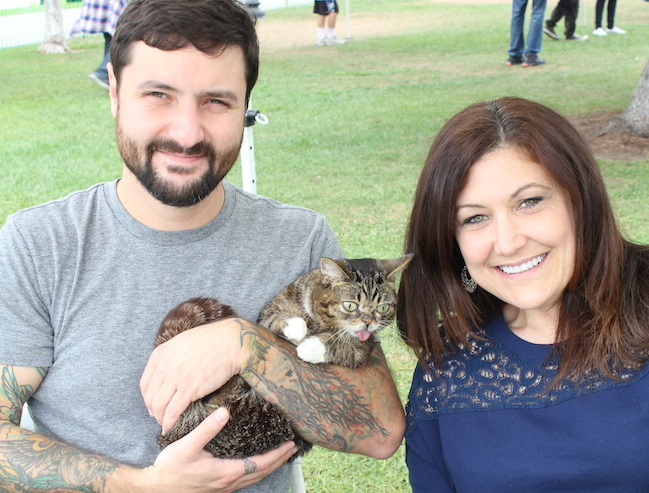 CATS Inc. volunteer Jennifer Moss caught up with international internet star, TV personality and published author, Li’l Bub. We had a chat with Bub and her “dude” Mike at Organikat’s LA Feline Film Festival this past weekend. Check it out!
JENNIFER: We’re here with Mike Bridavsky and his famous cat, Li’l Bub. They are here from Indiana, is that right?
MIKE: That is correct.
JENNIFER: Hello Li’l Bub!
LI’L BUB: Prrrrrrrrrrrrr!
JENNIFER: She won’t go running away or anything?
MIKE: Nope.
JENNIFER: She’s pretty tied to you?
MIKE: She’s just—well, she’s not an ordinary cat, really. She knows what she’s doing. I don’t know how else to explain it. This is all pretty normal for her.
LI’L BUB: Prrrrrrrrrrrrr!
JENNIFER: That’s awesome! Now, Bub was feral, right? Does she keep in touch with her biological brothers and sisters?
MIKE: No, she does not. In fact, we tried to find them for various reasons. For a documentary and also, there are researchers in Belgium doing some genetic testing. To figure out how Bub turned out the way she did, and also use that information to help people and animals. It would be great to find her biological family for some DNA testing. But we can’t find them because they’re feral, still.
JENNIFER: Have you tried looking for them?
MIKE: There were rumors of her mom still hanging around the house out in rural Indiana, but it’s very hard to find her.
JENNIFER: So, Bub was found in a house?
MIKE: She was found in a tool shed.
JENNIFER: A tool shed! Wow! And, what advice would you give people who were considering adopting a special needs kitty cat?
MIKE: You know, the first thing to consider is why do you want a special needs cat. If you want one because you think it will become famous, then do not get one.
JENNIFER: Exactly! 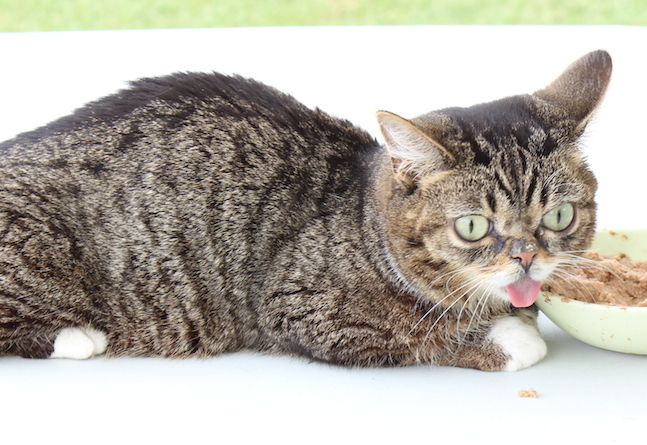 MIKE: If you want one because you think it’s cute, that’s not a reason to adopt, but that’s motivation to go look at them. You have to consider what makes the pet “special needs” and a couple of things: if you’re able to provide the special needs that the cat requires, if you’re ready for heartbreak, if you’re ready for difficulty. That’s what makes them special needs. Bub and I have had our fair share of surprises through all this and it’s hard. And some people can’t handle that. And that’s fine. That’s not a problem. But you need to make sure you’re the type of person who can take care of a special needs pet and make the right decision should you be faced with the difficult one.
JENNIFER: Obviously, yes.
MIKE: And also, make sure you have enough money set aside to take care of your pet. You know, we do a lot of charity work and we get people who are like, “You know, my pet needs surgery for $200 and can you share my GoFundMe page?” And I think, no, if you can’t afford a $200 surgery or even insurance, then you shouldn’t be doing this. We help homeless pets. Your cat already has a home and you need to step up as a pet owner.
JENNIFER: Well, even a healthy pet has costs associated with it! Every visit to the vet is going to cost you money, and they say on average it takes about $2,000 a year to maintain a home for a healthy cat.
MIKE: Yes, if you’re a good owner, absolutely.
JENNIFER: What has been your biggest challenge with Bub?
MIKE: I guess the surprises—dealing with each difficulty in her health as it comes along.
JENNIFER: Hey, Bub! You’re doing a great job!
LI’L BUB: Prrrrrrrrrrrrrr! Sqwonk!
MIKE: So, part of the challenge was the surprise of what is wrong with Bub, because we didn’t know at the beginning. She’s had a couple challenges, she’s had crystals in her bladder, so she eats prescription food. But the biggest challenge was when she was getting close to a year old she was having a hard time moving…and her mobility became severely impacted. She was army-crawling, and she could barely move. She was in a lot of pain and we discovered that she is the only cat in recorded history that was born with Osteopetrosis. An extraordinarily rare bone disease—in any animal—but there’s never been a cat born with it, and they didn’t know what to do. There is very little information about it, even in humans!
JENNIFER: So, what does that actually mean for Bub?
MIKE: Well, her bones keep getting bigger and bigger and her joints eventually get locked up and they get twisted and dense. She almost has no marrow in her bone cavity. And they told us there was no cure, we don’t even know what to do. But essentially she will eventually stop moving. And that was hard to take. And luckily she is famous… 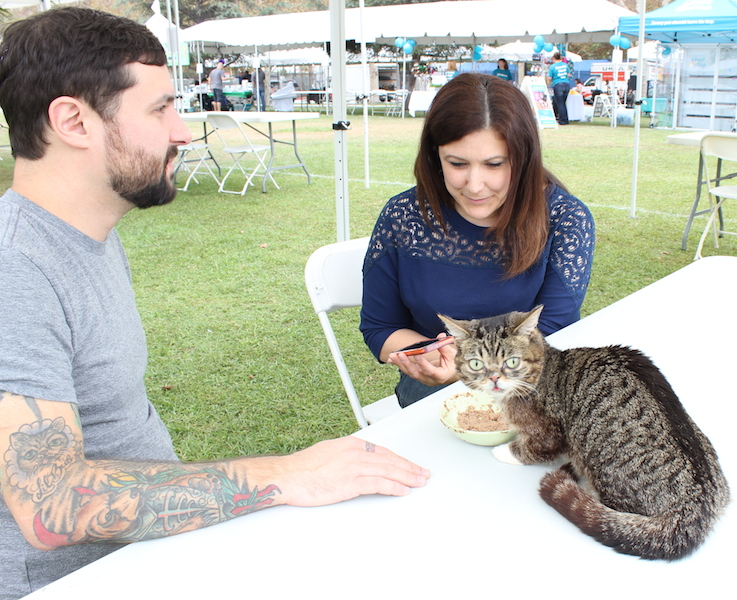 JENNIFER: Haha! Yes, luckily she is famous!
MIKE: I mean, that is why she became famous, to discover this cure for her disease.
JENNIFER: Do you feel like it’s kind of “kismet” then?
MIKE: I think she’s way smarter than we realize she is, and she knew that was the only way she could survive. I mean, in nature this critter would not have lived more than a couple of weeks.
JENNIFER: Awwwww [pets Bub]
MIKE: She has no teeth, she cannot run, she’s one-fifth the size of an average cat, she has dwarfism, but she knew there were resources out there available to her.
JENNIFER: She knew there was a reason she’s here.
MIKE: Yes. And this is the device that’s basically saved her life. And now at three years, she’s running, she’s jumping. She can jump on and off the couch. These were all things that we were told would be completely impossible. We just wanted her to be able to walk and get to the bathroom. And now she’s defied all odds. She just recently ran up a whole flight of stairs, which to us is incredible because each stair is taller than she is!
JENNIFER: Wow! Good job, Bub!
MIKE: I couldn’t do that.
JENNIFER: What is that device, can you explain it?
MIKE: Yes, it’s called the Assisi Loop. It was recommended by a fan as just an anti-inflammatory. It provides electro-magnetic pulse therapy. We put it around her body and just turn it on, and it sends these pulses through her. It’s not voodoo, it has to be prescribed by a vet. And it’s used quite often on humans. Overseas they use it for bone surgery. And actually it’s meant to be used for older pets, especially who can’t take medicine because of their kidneys. 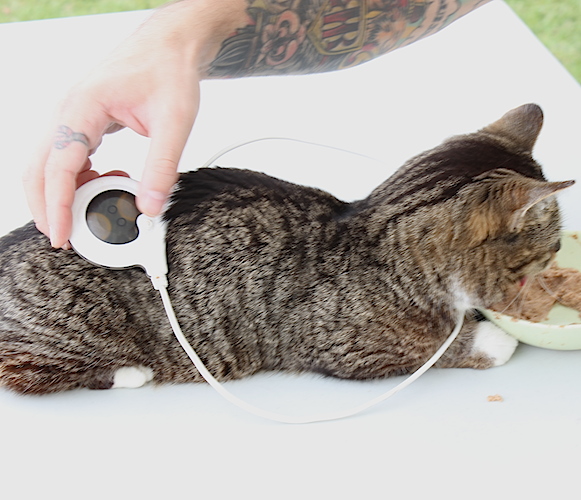 JENNIFER: That’s interesting. So that really works?
MIKE: It’s way more effective. She was on Prednisolone for pain and none of that worked. After a week of using this…it’s a very long story, but it turns out that for her bone condition—which is extremely rare and had no cure—this therapy cured it. Treated it for her. We just used it for pain treatment but after a couple of weeks I noticed she was standing up. And then she started moving. We’ve been using it for a year and a half now and she’s running and jumping. The more we use it, the better she gets. Which is completely not what we expected.
JENNIFER: Now we all know that cats are good at hiding their pain. What are the signals she gives you? How do you know if she’s hurting? Is it that you are just so in tune with her? Or does she just stop moving?
MIKE: It’s pretty obvious. A lot of people see her and say “Oh, she just always looks happy!” She is genuinely happy when she looks happy. When she’s upset, she’s genuinely upset and it’s obvious. It’s horrifying! When she sees another cat, you’ll see her stress out. She has the same mannerisms as other cats—her ears fold back, she hisses, she’s a real drama queen, honestly.
JENNIFER: Are you a drama queen, Bub?
LI’L BUB: Prrrrrrrrrrrrrrrrrrrrr!
MIKE: Right now there’s a lot of stuff going on around here, a lot of noise. But you see, she’s not terrified. Her paws are very sensitive, so if you mess with them too much you’ll see that she’s in pain.
JENNIFER: I know one thing I wanted to ask! Do Internet cats sit home all day watching videos of people working?
MIKE: Haha! Well, no, because people are boring. And one distinction I like to make is that I don’t like the term “internet cat.” She’s a real cat. She’s not on the internet right now!
JENNIFER: Oh yes, she’s a real cat. Aren’t you, Bub!
LI’L BUB: Prrrrrrrrrr sqwonk.
JENNIFER: Do you think she knows how awesome she is? And how much people love her?
MIKE: I think she does, yep!
JENNIFER: She feels the love! Does Bub get tired? I mean how do you know she’s had enough at an appearance like this?
MIKE: She falls asleep. 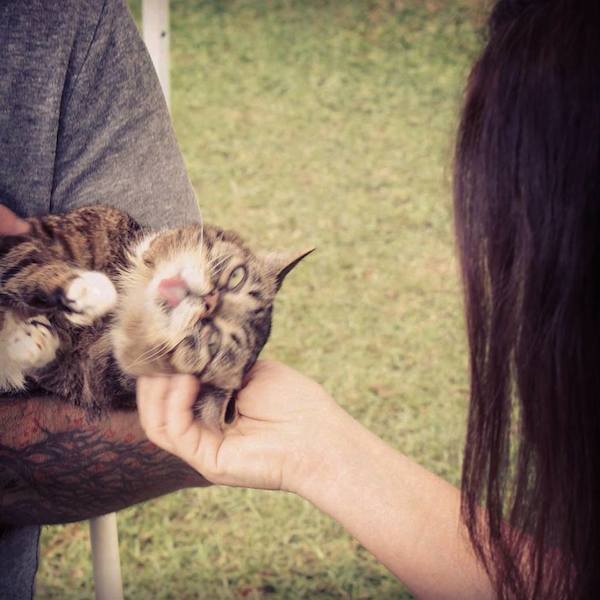